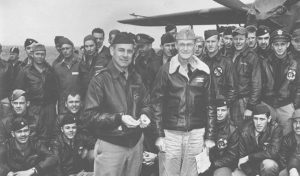 Doolittle Raiders – photo by National Museum of the Air Force.

On April 18, 1942, 80 men achieved the unimaginable when they took off from an aircraft carrier on a top secret mission to bomb Japan. These men, led by Lt. Col. James H. “Jimmy” Doolittle, came to be known as the Doolittle Tokyo Raiders.

Today, just one of the men survive: Lt. Col. Richard “Dick” E. Cole, who served as Doolittle’s co-pilot on Crew Number 1. Cole, now 101 years old, plans to return to the National Museum of the U.S. Air Force in April to commemorate the 75th anniversary of the raid and to pay tribute to fellow Raider SSgt. David Thatcher, who passed away in 2016.

— From the website of the National Museum of the Air Force.

The Museum in Dayton, OH plans to hold a memorial service at their facility on the 18th to include 17 B-25 bombers on static display and a B-25 flyover. The schedule of events for April 17-18 is available on their website.