You are here: Home / Chapter Outreach / STEM Presentation for the Boys and Girls Club of the Truckee Meadows

On June 20th members of Chapter 1361 (Mike Reynolds, Jan Bishop and Tracy Rhodes) hosted 25 kids from the Boys and Girls Club of the Truckee Meadows in the the Reno-Stead Airport Terminal.

The first stop was in the Community Meeting Room upstairs in the terminal where Mike Reynolds gave an aviation-oriented STEM presentation which did a good job of relating Newton’s three laws of motion to flight operations.

While still in the classroom the kids were exposed to their first challenge. They were shown a ping pong ball and a plastic funnel. The ball was placed into the large end of the funnel and the challenge was to blow into the small end of the funnel while holding it vertically and to blow the ball out of the funnel. Four members of the audience were chosen, two girls and two boys.

This challenge taught them about the pressure changes at the surface of the ball when air was accelerated around it from below.

The next challenge was set up in the Terminal Lobby. Six teams were chosen and given the task of moving a maximum number of paper clips from the floor of the terminal up to a height of approximately 7 feet where a metal washer was suspended from the second floor railing – without physical intervention from any team member. Each team was provided with identical bags of supplies with which to accomplish the task.

This is part of an Aerospace Challenge educational series developed by NASA. This is the first time that the Challenge had been presented to a group of kids at this age group. We were pleasantly surprised when one of the teams completed the challenge within the 40-minute time allotment. Another team was close enough to the solution that they would have been successful in the next 5-10 minutes if they were permitted to continue.

As a final session the kids returned to the Community room and received a recap of the day’s activities and ‘lessons learned.’ Each member of the winning team was then presented with a glider model kit in recognition of their successful design.

Here are some of the photos taken during the event: 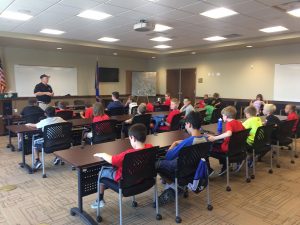 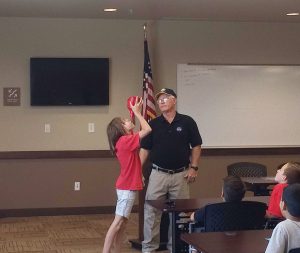 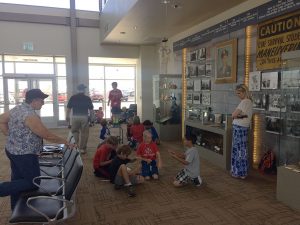 The teams in action. 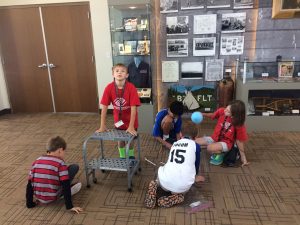 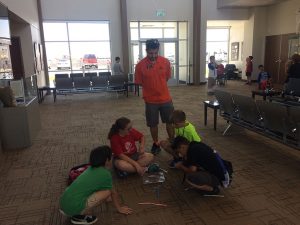 One of the teams being monitored by their superrvisor. 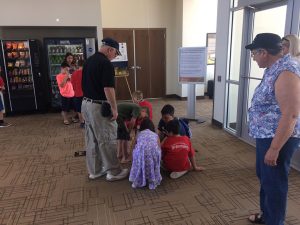 Two of the EAA Chapter members overseeing what turned out to be the winning team.