You are here: Home / News / The Perlan 2 Project accomplished a Short Test Flight This Weekend. 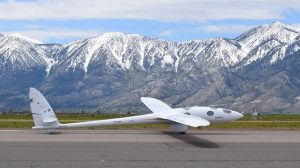 The Perlan II glider at KMEV.

The Perlan Project started may years ago as a possible means of accomplishing upper atmospheric research using a glider. The Perlan project was the subject of a Pathways to Aviation presentation at UNR in April of 2012. Quoting from the history section of the Perlan 2 website:

From 1992-98, Perlan’s founder and NASA test pilot Einar Enevoldson collected evidence on a weather phenomenon that no one at the time even knew existed: stratospheric mountain waves…

With the Perlan II Project and sponsorship from Airbus the team

…will fly to 90,000 feet at the edge of space to explore the science of giant mountain waves that help create the ozone hole and change global climate models. This will require the engineering of a spacecraft with glider wings that can fly in less than 3% of normal air density and at temperatures of minus 70 degrees C, conditions approximating the surface of Mars. These missions will provide education and inspiration for young people seeking careers of exploration and adventure in engineering and science.

If you are interested in learning more,  this is the Perlan Project website,  this is the blog section of their website and this is their listing of some of the press they have received.