You are here: Home / Flight Training / New Type of IFR-Simulating Glasses in Development 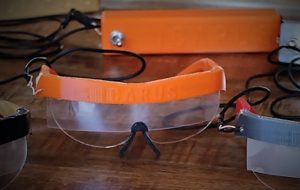 A new type of view-limiting device has entered testing at Purdue and Ohio State. The Instrument Conditions Awareness Recognition and Understanding System, or ICARUS, is electronically switchable and dimmable, allowing instructor or safety pilots to accurately simulate instrument conditions in flight. The ICARUS Device uses “Smart Glass” technology to electronically switch the lenses between opaque and clear. The device will finally give instructors the ability to replicate visual flight into instrument conditions, allowing the element of surprise to be maintained and the dangers of spatial disorientation better illustrated.

On average, one in eight fatal general aviation accidents is due to visual flight into instrument conditions. While many have sought to solve the problem by making a better aircraft, ICARUS intends to make a better pilot. The device also has the capability to simulate a wide range of visibilities, giving instructors the chance to mimic breaking out at decision height into a mile visibility or marginal VFR conditions.

The device is designed to be comfortable and user-friendly. Cues were taken from military spec safety glasses, which also are intended to be worn with headsets. The pilot can wear the device from takeoff to touch down, negating the need to awkwardly switch controls at decision height. With a planned price comparable to a nice pair of sunglasses, ICARUS is intended for all pilots and aircraft. The company is working with the most prominent advocates for instrument proficiency, EAA’s IMC Club, to improve safety.

ICARUS Devices was founded in 2015 by Nick Sinopoli, a 2012 Graduate of Purdue with a degree in Aeronautical Engineering. The inspiration came after his own flight training experiences in the Navy and losing a friend to a VFR into IMC helicopter crash in 2012. In August of 2016 a patent was issued and the next version will be a visor specifically for military and helicopter pilots. ICARUS Devices is extremely excited to have the support of EAA’s IMC Club for testing and implementation.