You are here: Home / Homebuilding/Aircraft Maintenance / It’s Just an Airplane

That’s what the late Jack Bally called his monumental effort that built his 1/3-Scale Boeing B-17 bomber.

When asked why he chose to build this particular plane, he said:

“Some of my friends were discussing next projects, and we picked this because there isn’t any other ones out there,” Jack recalled. “There’s two-engine P-38s made, and there’s a lot of P-51s, but there ain’t no four-engine bombers out there. So let’s build one.”

Jack didn’t have any kind of an engineering background, but a few decades as a carpenter taught him a thing or two about working with his hands. As for learning to work with metal versus wood, he pointed out with a laugh that he “did side two houses with aluminum.”

Read this article from EAA’s Inspire website to learn more about the “Bally Bomber.” 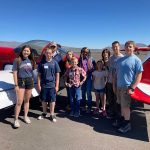