You are here: Home / VMC Club / Our Next VMC Club Meeting is January 2nd!

The August EAA Chapter 1361 sponsored VMC Club meeting will be conducted at 5:30 pm on January 2nd in the Community/EOC room of the Reno-Stead Terminal building at 4895 Texas Avenue.

We had a great discussion at our August meeting involving operations at a towered airport in Washington. A pilot with a passenger found themselves in an unsafe situation. With only the minimum legal fuel reserves available they found the crosswinds at their destination higher than the maximum permissible for their aircraft. The discussion centered around possible ways out of their predicament using the resources available.  As always, the ultimate responsibility for a safe flight rests with the pilot in command.

Light refreshments will be available. 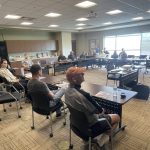 Our next Chapter 1361 General Meeting will be on SATURDAY, July 2nd at 9 AM. The meeting will be conducted both in-person and online via Zoom. (Click the title to learn more.)