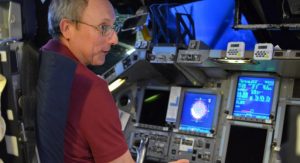 Paul Dye has over 40 years of aviation experience as an engineer, builder and pilot. His scope has ranged from restoring J-3 Cubs to planning and leading manned spaceflights. His love of flying machines dates back to early childhood, and he became involved with full-sized aircraft as a teenager, rebuilding J-3 Cubs with an FBO in Minnesota. He earned his degree in Aeronautical Engineering with a specialization in aircraft design and flight testing from the University of Minnesota in 1982. He worked in increasingly responsible roles within the US Manned Space Program since that time, both as a technical expert in spacecraft systems and eventually as the overall lead of many missions to space. He retired from NASA in 2013 as the longest-serving Flight Director in U.S. history. The winner of many prestigious awards, he delights in bringing the lessons learned from the most advanced flight operations back to the general aviation world for pilots and builders to understand. He is well-known as a risk-management specialist, and advises designers and builders – as well as pilots – on ways to build and operate aircraft with greater margins of safety.

Paul lives in the Dayton Airpark with his wife Louise Hose, a geology professor, internationally known cave explorer, and pilot.

Always a prolific writer, he has been a frequent contributor to type-club newsletters and web sites for many years. After retiring from NASA as a Lead Flight Director for Human Spaceflight, he became Editor in Chief for Kitplanes Magazine, a publication dedicated to supporting the experimental aircraft industry. He attends most of the large aviation meetings and fly-ins around the United States, test flies aircraft for individuals and for magazine evaluations, and enjoys speaking to aviation and civic organizations on a variety of topics related to aviation.

Paul writes about his flying experiences on his website at http://ironflight.com.